For bookings please vist our website and book online.

Monday is our day off and we do not offer breakfast.

Thank you for your understanding and we are looking forward to seeing you in winter. 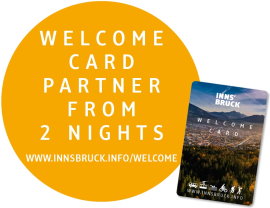 On course... have a game on our golf course with your private golf pro for just € 80,-

The golf pro will help you improve all your skills.

Towering high above Innsbruck on the wooded Bergisel Hill, the brand-new Bergisel Ski Jump is a sight to behold. 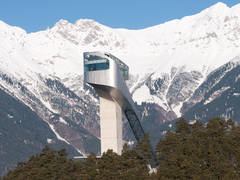 The hill itself is a historic site, scene of the 1809 battles in which Andreas Hofer led some Tyrolean peasants against French and Bavarian forces in the Tyrolean War of Independence. The first ski jump was erected here in the year 1925. And in 1964 and 1976, the Innsbruck Ski Jump was venue of the Olympic Ski Jumping competitions.

Reconstruction plans have been discussed widely. Finally, Iraqi-born and London-based star architect Zaha Hadid won the related architectural competition and designed the spectacular new ski jump. Construction works began in 2001 and have been completed in September 2002. Zaha Hadid designed what is already considered a tourist attraction that should be on the itinerary of every visitor to Innsbruck.

The Tower stands 47 meters tall and provides spectacular views.
The new facilities now can hold 28,000 spectators. Each year, the refurbished Bergisel Stadium plays host to the annual Four Hills Tournament in January and to a Summer Grand Prix Jumping Event. All Bergisel Stadium facilities, including gondola, elevator, panoramic café, and vantage spot on the jumping platform are open to visitors. From the stylish Restaurant there are uninterrupted panoramic views of the lofty surrounding peaks of Patscherkofel, Nordkette, Hohe Munde and Serles.
As of May 2003, the visit to Innsbruck's newest architectonic attraction is free with the "All Inclusive Innsbruck Card".

MUCH SPACE FOR FANTASY
In order to experience the phenomenon of crystal, the Austrian family enterprise Swarovski realized in the year 1995, on the occasion of the 100-year-jubilee of the company, an installation of lasting value, the Swarovski Crystal Worlds. 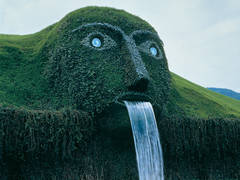 Under the direction of André Heller, innovative interpretations of renowned international artists, the multi-faceted play of crystalline colours and forms and the world of special scent and sound merge here into a kaleidoscope for all the senses.

Just as the crystal stands as an age-old symbol for change and transformation, the Crystal Worlds are continually extended, redesigned and transformed, in order to create new space for dreaming. They invite, far from everyday life, to a magical experience. Within the interior of the "Giant", fascinating Chambers of Wonder, the so-called Crystal Stage, the largest world-wide Swarovski Shop, in visionary design, the Café-terra, where DO & CO International offer exquisite meals and drinks, and especially for children designed areas within the Giant and in the park await the visitors. Moreover, the Crystal Worlds are a fantastic stage for cultural events, alternating special exhibitions and winter festivals.

Amidst the charming Old Town, a classic Austrian hybrid of Gothic and Baroque, you will find Innsbruck's greatest tourist attraction and certainly its most characteristic landmark: The Golden Roof.

Take a stroll, enjoy a spot of shopping, meet friends, have a drink in one of the pavement cafés, take in the wonderful Baroque architecture and savour the city panorama - it can all be done in the Maria-Theresien-Strasse.

once was seat of the Tyrolean sovereigns...

The Hofkirche (Court Church) in Innsbruck with its memorial for Emperor Maximilian I is the most prominent tomb memorial for an emperor in Europe. Furthermore it provides evidence of European court art for which the best artists...

Rising up 51 metres, Innsbruck's City Tower was built between 1442 and 1450 as an extension of the former City Hall and to this day it ranks amongst the town's most important historical landmarks, together with the Golden Roof...

Is one of the city´s most noteworthy attractions.

The huge two-towered front of the St. James Parish Cathedral dominates the square at the northwest of the Imperial Court.

Wilten's Parish and Pilgrimage Church, the Wilten Basilica, is one of the most splendid houses of worship in Tirol.

The city of Innsbruck is suffused with the spirit of the Habsburg dynasty. Emperor Maximilian I completed the magnificent "Goldenes Dachl", Leopold I founded the university and Maria Theresa's association with Innsbruck…

All over the world - in nearly 100 countries - bells from Grassmayr Bell Foundry in Tyrol can be heard tolling. The Grassmayr family has been casting bells for the whole world for 14 generations. It has 400 years of experience,...

An impressive online collection of Baroque Art has been gathered by "Museum with no Frontiers". Some fine samples of baroque art in Innsbruck and the Tyrol can be found on this website.

Thanks to its outstanding geographical location, Casino Innsbruck serves the most important markets like Italy, Germany, Switzerland and western Austria.

A Crystal of many colors and facets
For many years, SWAROVSKI INNSBRUCK has been a sparkling attraction in the center of the old town that surrounds Innsbruck's Goldenes Dachl (Golden Roof).

Exceptional hearing experiences and fascinating acoustic landscapes promise to take both young and old visitors on an exciting journey into the world of hearing.

The church with its lavish murals and ornate plasterwork is a superb example of 18th century Rococo style architecture.

The mill is situated at the end of the long drawn village of Ellboegen in Innerellboegen. Apparantly the first mill was established here in the 16th century.

The Wilten Boys' Choir is one of the most venerable and oldest boys' choirs in the Alpine world. It dates back to the 13th century....

Here's an overview of Innsbruck's history from the Romans to today ...

Innsbruck offers a huge variety of interesting destinations for young and old!

Take the kids to the Mutterer Alm adventure mountain. Or how about a ghost walk on the Rangger Köpfl? Innsbruck and its holiday villages offer a colourful spectrum of activities; family fun in the great outdoors! ...

The voluntary members of the association for farmhouse holidays are assessed according to 150 criteria and awarded two, three or four flowers.